The flower language of roses: the hidden meaning behind each shade

Roses are still one of the most prominent wedding flowers chosen by couples to feature in their big-day styling. But how do you know which colour rose to get? Each colour has a specific meaning, and depending on the occasion, one will be better suited than the other. During the Victorian era, flower language, also known as floriography, gained prominence. Flowers, especially roses, were used to convey a secret message without having to speak. This tradition has carried through today, and roses are much appreciated as a stand-alone gift, as well as a sentimental complement to a main present.The gemstone jeweller Angelic Diamonds has ranked the most popular colour roses in the UK based on Google search volumes and reveals the hidden messages behind each to help you find the perfect one.

White roses: a symbol of purity and innocence – 110,000 searches
No wedding will ever be the same without a white rose implemented in the décor or the bride's bouquet. In fact, white roses hold as much significance as something old, something new, something borrowed, and something blue.
Featuring white roses in a wedding is a spell for a long-lived marriage. They are associated with the beginning of new creations; such is the divine unity between two lovers. It also symbolises peace, innocence, and pure love.
In ancient Greece, white roses were often used as a healing potion and were found in herb gardens throughout the land.
Gift a single white rose for trust and peace, and a bouquet of more than five roses to signify everlasting love. Be wary that if the bride's bouquet consists of less than five white roses, it can bring about a difficult marriage. They are also the emblem of Yorkshire, so you can make someone from the region happy by giving them a white rose.

Red roses: a classic love token – 49,500 searches
Legend has it that when Aphrodite, the Goddess of Love, found her lover, Adonis, wounded by a wild boar, her tears and his blood mixed together and created an astonishing red rose bush when they fell on the ground.
Later on, during the Victorian era, Shakespeare monumentalised the red rose-gifting as a supreme expression of love and passion. Since then, the many of shades of red in roses has symbolised the multitude of layers of love. For example, deep, velvety red nuances represent meaningful romance, while bright red roses are a symbol of courage and bravery in love.
The number of gifted roses is also of high importance. Give a single rose to your long-term partner to tell them that they're still the one. Why not pair it with an eternity ring on your wedding anniversary to assert your ever-lasting bond? Two roses signify mutual love and affection, while twelve roses scream "be mine". And, of course, the classic 100 roses are a gesture of ultimate devotion and a great hiding place for an engagement ring, if you're to propose.

Black roses: a symbol of death and rebirth – 18,100 searches
As dramatic and expressive red roses can be, black roses take on a different deep meaning. A symbol of death and tragic love, the black rose has been incorporated into literature and pop culture.
Originally, it symbolised power and strength amongst ancient cultures, and it became really popular in the Victorian era as part of gothic and macabre literature. But the floriography of the black rose has quite a dark meaning. For example, the Sicilian mafia would send a black rose to someone to notify them that death was coming. In popular culture, this particular flower has been associated with anarchist ideology since 1982.
Black roses are given at funerals to express mourning. They also signify rebirth and new beginnings. In literature, characters are often gifted a black rose when they start a new chapter of their life to signify a change of character. if you give one to a person, it can signify that you hope it all works out in the best-case scenario for them.

Blue roses: imbued with mystery and wishful thinking – 12,100 searches
Violets may well be blue, but roses are too! Well, not naturally, but the advancements in genetic engineering have made our desire for royal blue roses come to fruition.
Of course, there is a little legend that accompanies the origin of the blue rose. In Chinese folklore, an Emperor's daughter was to choose her husband, and her only requirement was that the chosen one will be the one who brings her a blue rose. She turned down all candidates who attempted to fabricate a blue rose. Some brought her a rose painted in blue, one carved out of sapphire, or a magical one, yet none of them were suitable for the princess. Until the gardener's son, whom she had her heart set on, brought her a white rose one day and she said yes to him. Everyone was puzzled by her decision, but they lived happily ever after.
Since they're a true product of our imagination, blue roses are a symbol of mystery and unattainableness. It is an epitome of something that is meant to simply remain a dream, a wishful thinking that resides within the realms of our vast imagination.
However, blue roses signify new beginnings, and they're a great gift for someone starting a new career, going on a journey, graduation ceremonies, and birthday celebrations. But don't gift a blue rose to someone you wish to start a relationship with – though it sometimes symbolises love at first sight, a blue rose can also represent unrequited love.

Pink roses - 12,100 searches
The most ancient of all roses which dates back 40 million years and also the most iconic one is the pink rose. Imbued with rich symbolism of love, beauty, and gratitude, it's a staple gift for women that alludes to their grace and femininity.
Pink roses appear in ancient literature, music, and paintings, and are part of many cultures around the world. For example, they're an emblem of Bulgaria, where flocks of people go to savour the rose valleys and indulge in the gamut of rose products, from rose perfumes and lotions to rose liqueurs and chocolates. Other Mediterranean countries, alongside places like Persia and China, are also prominent for their abundance of pink roses. According to some Hebrew texts, the only flowers that were allowed in the Holy City of Jerusalem were pink roses. In terms of gift-giving, you can never go wrong with a pink rose. Gift your mother a dark pink rose for her birthday or Mother's Day to show her your gratitude and appreciation. Teachers, mentors, and other female relatives would also appreciate a dark pink rose. Pale pink roses are ideal to express admiration and love for someone with whom your emotions are still budding. Up until about 50 years ago, it was a Bulgarian tradition for boys to wait for the maiden they have their heart set on at the central water fountain in the village and gift them a pink rose as an invitation to a date.

Floriography allows us to communicate our emotions through the use of arrangements of beautiful flowers. The gesture of rose-gifting is imbued with deep meaning, and it's a subtle way to express gratitude, appreciation, love, or compassion. Roses allow you to say the right thing through enchanting aroma and saturated colours, so speak your heart! 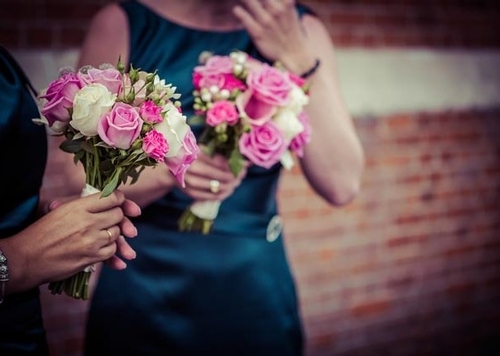 Sarah Knowles MW joined The Wine Society in March 2014 and passed her Masters of Wine...

Until recently engagement rings were seen as exclusively a female item of jewellery but the team at Ingle & Rhode...

Looking to tie the knot outside? Make sure it's legal!

Here at County Wedding Magazines HQ we welcome any changes in the law that allow people to...

Sarah Knowles MW joined The Wine Society in March 2014 and passed her Masters of Wine...